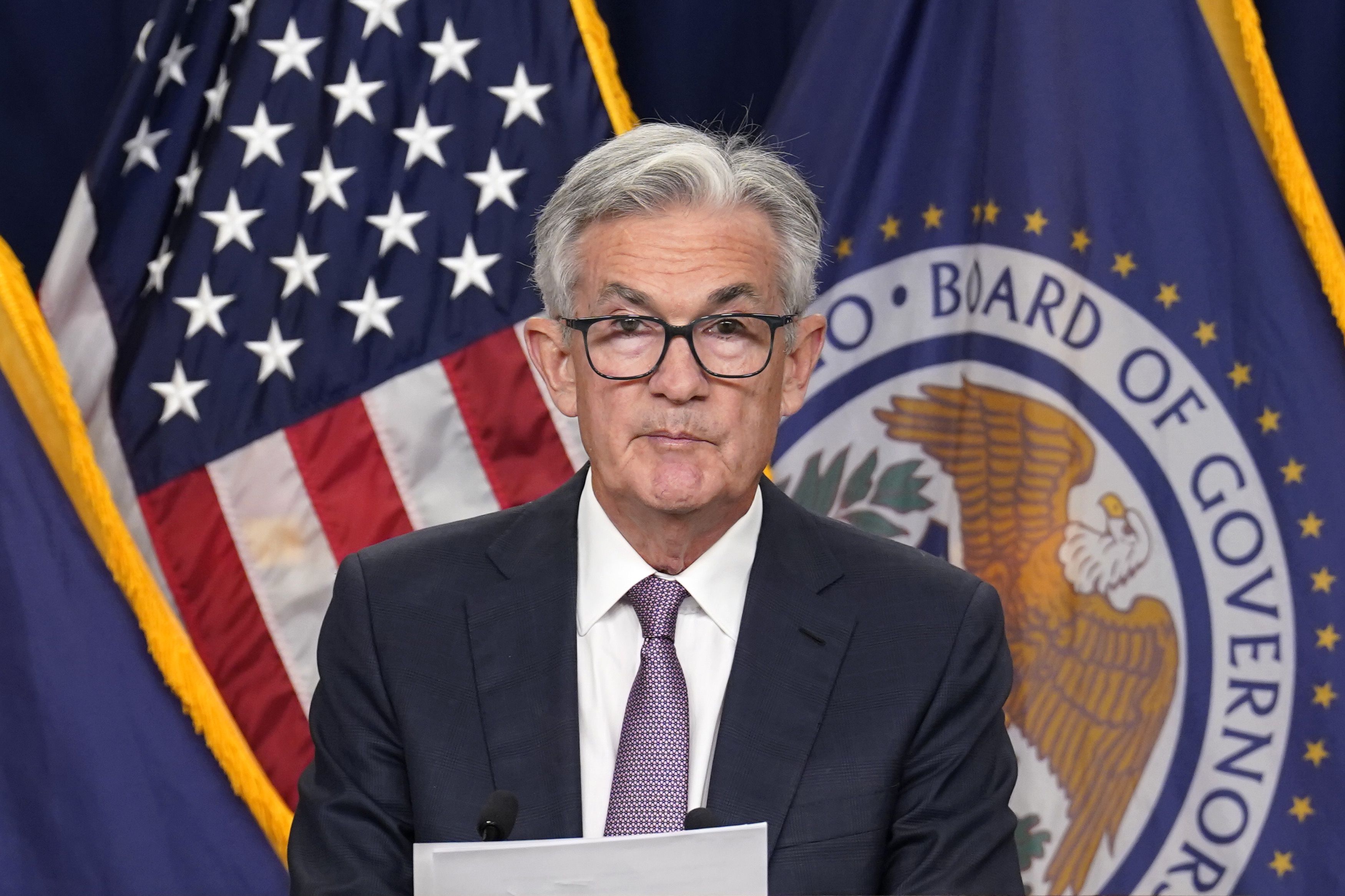 WASHINGTON — Stepping up its fight against high inflation, the Federal Reserve raised its key interest rate Wednesday by three-quarters of a point for the third straight time and signaled more major rate hikes to come, an aggressive pace that will increase the risk of an eventual recession.

The Fed move pushed its short-term benchmark rate, which affects many consumer and business loans, to a range of 3% to 3.25%, the highest level since early 2008.

Officials also forecast that they will further raise their benchmark rate to about 4.4% by the end of the year, one point higher than they had forecast in June. And they hope to raise the rate again next year, to around 4.6%. That would be the highest level since 2007.

By raising lending rates, the Federal Reserve makes it more expensive to get a mortgage, car or business loan. So consumers and businesses presumably borrow and spend less, cooling the economy and slowing inflation.

The drop in gasoline prices has slightly reduced headline inflation, which was still a painful 8.3% in August compared to a year earlier. Those falling prices at the gas pump could have contributed to a recent surge in President Joe Biden’s public approval ratings, which Democrats hope will improve his prospects in November’s midterm elections.

Speaking at a news conference, Chairman Jerome Powell said that before Fed officials consider stopping their rate hikes, they “would want to be very sure that inflation is coming back” to their 2% target. He pointed out that the strength of the labor market is driving wage gains that are helping to increase inflation.

And he emphasized his belief that curbing inflation is vital to ensuring the long-term health of the labor market.

“If we want to light the way to another period of a very strong job market,” Powell said, “we have to get past inflation. I wish there was a painless way to do it. There isn’t.

Fed officials have said they are looking for a “soft landing,” whereby they would slow growth enough to control inflation but not enough to trigger a recession. However, most economists are skeptical. They say they believe the Fed’s sharp rate hikes will, over time, lead to job cuts, rising unemployment and a full-on recession later this year or early next.

“Nobody knows if this process will lead to a recession or, if so, how significant that recession would be,” Powell said at his news conference. “That’s going to depend on how quickly we bring down inflation.”

In their updated economic forecasts, Fed policymakers project that economic growth will remain weak for years to come, with unemployment rising. They expect the unemployment rate to reach 4.4% by the end of 2023, up from its current level of 3.7%. Historically, economists say, whenever unemployment has risen by half a point for several months, a recession has always followed.

Fed officials now see the economy expanding just 0.2% this year, well below their 1.7% growth forecast just three months ago. And they forecast slow growth below 2% from 2023 to 2025.

Even with the steep rate hikes the Fed anticipates, it still expects core inflation, which excludes the volatile categories of food and gas, to be 3.1% by the end of next year, well above its 2% target. .

Powell acknowledged in a speech last month that the Fed’s actions will “bring some pain” to households and businesses. And he added that the central bank’s commitment to lower inflation to its 2% target was “unconditional.”

Short-term rates at a level the Fed now forecasts would make a recession more likely next year by sharply raising the costs of mortgages, auto loans and business loans. Last week, the average fixed mortgage rate topped 6%, its highest point in 14 years, which helps explain why home sales have plummeted. Credit card loan costs have reached their highest level since 1996, according to bankrate.com.

Inflation now appears to be increasingly driven by higher wages and consumers’ continued desire to spend, and less by supply shortages that had plagued the economy during the pandemic downturn. On Sunday, Biden said on CBS’s “60 Minutes” that he believed a soft landing for the economy was still possible, suggesting that his administration’s recent energy and health care legislation would lower the prices of pharmaceuticals and health care. .

The law may help reduce prescription drug prices, but outside analysis suggests it will do little to immediately reduce overall inflation. Last month, the nonpartisan Congressional Budget Office deemed it would have a “negligible” effect on prices through 2023. The University of Pennsylvania’s Penn Wharton Budget Model went even further, saying “the impact on inflation is statistically indistinguishable from zero” over the next decade. .

Still, some economists are beginning to express concern that the Fed’s rapid rate hikes, the fastest since the early 1980s, will cause more economic damage than is necessary to control inflation. Mike Konczal, an economist at the Roosevelt Institute, noted that the economy is already slowing and wage increases, a key driver of inflation, are leveling off and, by some measures, even tapering off a bit.

The Fed’s rapid rate hikes mirror steps other major central banks are taking, adding to concerns about a potential global recession. The European Central Bank last week raised its benchmark rate by three-quarters of a percentage point. The Bank of England, the Reserve Bank of Australia and the Bank of Canada have all carried out large rate hikes in recent weeks.

And in China, the world’s second-largest economy, growth is already taking a hit from repeated government COVID lockdowns. If the recession wipes out most of the big economies, that could also derail the US economy.

Even with the Fed’s accelerating pace of rate hikes, some economists (and some Fed officials) argue that they have yet to raise rates to a level that actually restrains lending and spending and slows growth.

Many economists seem convinced that widespread layoffs will be necessary to curb rising prices. Research published earlier this month under the auspices of the Brookings Institution concluded that unemployment could reach 7.5% for inflation to return to the Fed’s 2% target.

“The risk is that the Fed will act more aggressively in its mission to bring inflation back to its 2% target, pushing the funds rate higher than expected and keeping it higher for longer,” Nancy Vanden Houten, economist leader for the US in Oxford Economics. she said Wednesday after the Fed meeting.