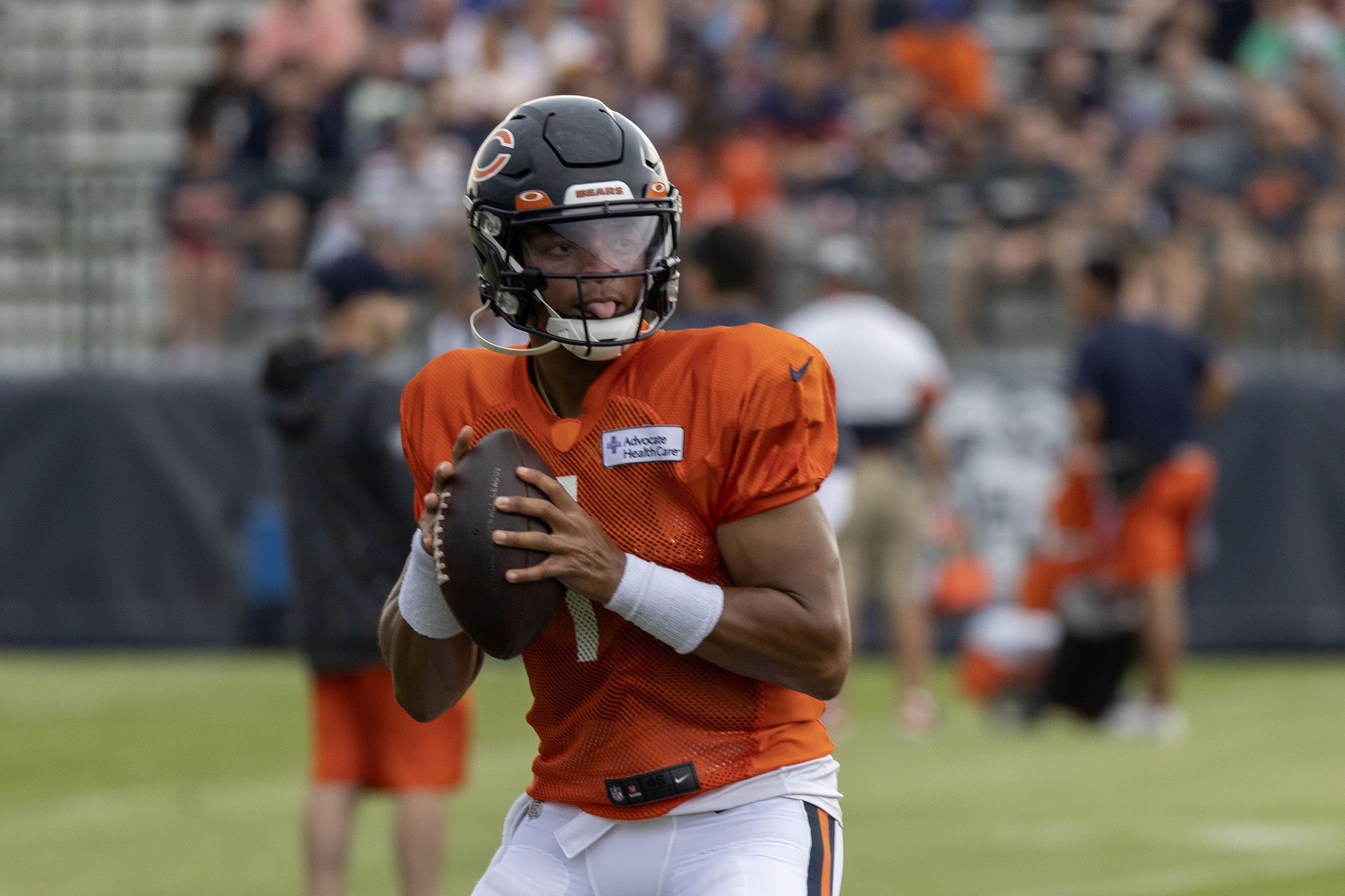 Chicago Bears quarterback Justin Fields spoke with members of the press Wednesday at Halas Hall for the first time since training camp began.

Here are four things we learned as the Bears wrapped up their second practice and headed into a day off.

Bears coach Matt Eberflus said he thought the offense performed better Wednesday than the day before, with fewer pre-snap penalties and better operation during a late-half simulation that ended with a field goal by cairo saints.

But nobody pretends that the offense is where it should be. That includes Fields, who acknowledged the slow process of getting the offense going under a new coaching staff with lots of new players.

“It’s hard because you want to know everything right now,” Fields said. “You want to be successful at everything right now, so it’s really just knowing there are going to be mistakes, knowing you’re going to have to learn, and making sure you don’t make the same mistakes twice. … There will be failures, but you will only learn from the plays where maybe you were wrong and of course you will not do it again.

However, having that patience, and the awareness of moving quickly from a failed play, isn’t always easy.

“That’s one thing I need to do a better job of this year is when the play isn’t there, shooting the ball or controlling it.”

Eberflus said the Bears are still calculating how many snaps he’ll give first-team players in the Aug. 13 preseason opener at Soldier Field, but he wants to “get them a good amount.”

Coaches’ philosophies on preseason playing time vary. But in the Bears’ first season on staff, Eberflus said coaches need to see what they have with such a young roster.

“You have to assess your soccer team, where it is,” Eberflus said. “And could (philosophy) be a different place in the next few years? Yes, I think it can be. I don’t think it’s a hard and fast rule where I’m playing so many plays on the first, second and third.”

Fields said reps against a new defense will be beneficial.

“We practice against our defense every day, so to be able to play someone else, that will be good for us,” he said.

Fields’ connection to great wide receiver Darnell Mooney is obvious, but beyond that, the quarterback has a mostly new set of targets to get in tune with this season.

When asked who he’s building chemistry with, Fields started with St. Brown, who spent four seasons with the Green Bay Packers and knows new offensive coordinator Luke Getsy’s system. St. Brown had a couple of big catches during practice Wednesday, but he, too, turned the ball over on a hit by linebacker Joe Thomas on one of them.

“(St. Brown) has been in this offense for a number of years, so he doesn’t really make any mistakes when it comes to executing plays,” Fields said. “He definitely is always in the right spot and knows where to be on certain plays. He is a weapon in this offense.”

Fields said he’s getting a lot of reps with Byron Pringle and Velus Jones Jr., “knowing how they run their routes and things like that.”

Speaking about Fields’ leadership on Monday, Pringle mentioned that the quarterback has been willing to pick on his teammates when they make a mistake. He said Fields recently talked to him when he lined up in the wrong formation.

is online with Eberflus directive not to walk by errors.

“Those guys know not to take it personally because we’re all fighting for the same goal,” Fields said. “We had a conversation before camp: We are going to hold everyone accountable. So, if you’re not doing your job or you make a mistake, they’re going to insist. They will yell at you, but at the end of the day, no one will take it personally.

“Everyone is working to win games, so that’s all that matters. If they take it in a positive way, we can improve with that.”