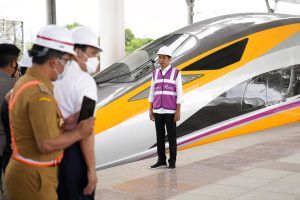 Indonesia is preparing to launch Southeast Asia’s first high-speed rail service that will reduce travel time between two cities from the current three hours to around 40 minutes.

As the Jakarta-Bandung part of the railway project neared 90 percent completion, Indonesian President Joko Widodo on Thursday visited Bandung’s Tegalluar Station, one of four stations on the railway, where eight train cars and an inspection train that arrived from China in early September. .

“We hope that with the Jakarta-Bandung high-speed rail, the mobility of goods and people can be faster and better, and our competitiveness will also be stronger,” Widodo told reporters during the visit. Widodo also hoped that the bullet train would benefit other sectors.

Earlier reports said Widodo would invite his Chinese counterpart Xi Jinping to ride the Chinese-made bullet train after the Group of 20 largest economies summit in Bali next month. However, Widodo told reporters Thursday that the plan is still being discussed with Xi and is “not final yet.”

The train cars were designed and built by China’s CRRC Qingdao Sifang Railway Company. The September delivery was CRRC’s first high-speed train export under its contract for 11 eight-car KCIC400AF trains and one KCIC400AF-CIT inspection train. The contract, worth $364.5 million, was awarded to CRRC in April 2017.

Construction of the rail line that began in 2016 was originally expected to begin operations in 2019, but was delayed until June 2023 due to disputes related to land purchases and environmental issues.

The $7.8 billion, 142.3-kilometre railway is being built by PT Kereta Cepat Indonesia-China, or PT KCIC, a joint venture between an Indonesian consortium of four state-owned companies and China Railway International Co. Ltd. The joint venture said the trains will be the fastest in Southeast Asia.

The CRRC stated that the KCIC400AF train can reach speeds of up to 350 kilometers per hour, pass curves with a minimum radius of 150 meters and is equipped with electric motors, each rated at 625,000 watts. The cars will be divided into three classes: VIP, first and second, and several cars with large spaces between seats will be allocated for passengers with reduced mobility.

The manufacturer said the trains are specifically modified to suit Indonesia’s tropical climate and are equipped with an enhanced safety system that has the ability to track earthquakes, floods and other emergency conditions. The length of the eight-car train is 208.9 meters.

The rail deal was signed in October 2015 after Indonesia selected China over Japan in competitive bidding and was financed 75 percent with a China Development Bank loan. The remaining 25 percent are the consortium’s own funds.

The project is part of a planned 750-kilometre high-speed rail line that would run through four provinces on the main island of Java and terminate in the country’s second-largest city, Surabaya.

Improving infrastructure, Widodo’s signature policy, helped him win a second term in the 2019 election.
The Jakarta Metro, a Japanese-backed venture, opened in 2019 as part of the capital’s efforts to ease traffic congestion. Its second phase will soon be completed and the UK and Japan have offered the country soft loans for its third phase, Transport Minister Budi Karya Sumadi said.

The government has completed other rail projects, including light rail transit services in Palembang and Jakarta, while five other cities, including Indonesia’s resort island of Bali, have LRT plans in the works.