How to read China’s unwritten rules and regulations Effective regulation must strike a delicate balance between encouraging innovation while discouraging excessive risk-taking. If regulation is too strict, it can stifle progress; If regulation is too lenient, it may fail to prevent fraud that can threaten the stability of the economic and financial system. To resolve this compromise, China relies heavily on flexible implicit regulations that complement explicit rules. This reliance on implicit regulations sometimes creates ambiguity, which Chinese business culture is quite comfortable with. However, this ambiguity does not amount to breaking the law. Rather, it helps business and government navigate a fast-paced environment where formal rule making cannot keep up with the rapidly changing landscape.

Implicit regulations are norms that have not been codified into formal rules but nonetheless provide guidance for acceptable behavior. In China, such implicit regulations are often expressed as the opinions of high-ranking government officials. These opinions appear much more in the Chinese media compared to their Western counterparts. For example, a comparison of fintech-related news between major Chinese and US media outlets shows that Chinese-language media are much more likely to mention a high-ranking government official than news written for a Western audience. Surprisingly, these differences in coverage exist even between media outlets owned by the same publisher but targeting different audiences (such as Caixin’s Chinese and English editions). These differences in business news coverage reflect the importance of implicit regulations in China. 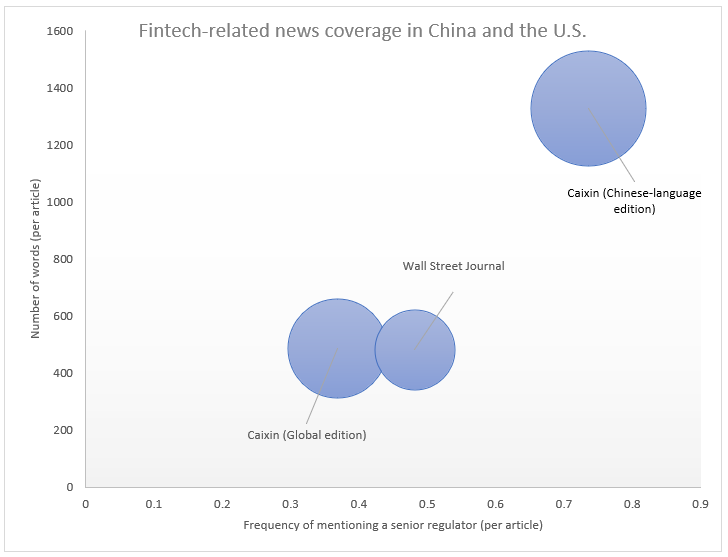 Implicit regulations have the advantage of being flexible, allowing the government to respond quickly to rapidly changing circumstances. However, flexibility can lead to arbitrariness, which, in turn, can sabotage the very purpose of regulation as a set of rules that everyone must follow. There are at least two factors that keep the arbitrariness of China’s implicit regulations in check. First, the strength of the Chinese government combined with its overall focus on economic prosperity keeps the incentives of individual regulators in check. Second, China’s long legal history has carved out a role for implicit regulations while maintaining the supremacy of written rules.

Because Chinese regulators generally strive to promote economic growth, the interaction between China’s implicit and explicit regulations follows a predictable pattern. Initially, innovation (including financial innovation) is often allowed to unfold with few or no explicit rules. Should signs of misconduct emerge, regulators step in by providing implicit guidance rather than issuing explicit rules. If implicit guidance is not enough to curb the excesses that concern government officials, explicit (and often strict) rules are followed.

When explicit regulations are enacted, they create a flurry of new rules. While these rules may seem arbitrary to an outside observer, they merely codify the implicit (and thus not publicly observed) guidance that preceded them.

A recent example of this regulatory cycle is the evolution of peer-to-peer (P2P) lending in China. P2P outlets appeared in China in 2007, but it was not until 2014 that the first explicit regulation targeting this industry was issued. Initially, senior Chinese officials expressed positive views on the industry. On November 9, 2015, for example, Chinese President Xi Jinping delivered a speech in which he called for the development of inclusive finance. As the growth of P2P accelerated, signs of fraud appeared and breaches proliferated. However, the government did not completely ban P2P. Instead, it began to send strong signals that financial misbehavior and fraud should stop. In a marked change in the government’s position, Xi called out some specific P2P lenders by name (E-zubao and Zhongjin) stating that they engaged in fraudulent activities that must be stopped. The government eventually issued a series of explicit rules in 2019, effectively shutting down the P2P industry in China.

The history of P2P lending contains lessons about the logic of Chinese regulation in general. First, due to a substantial implicit component, China’s regulations can change quite rapidly. Second, formal explicit rules often follow the implicit guidance of government officials, but such explicit rules are difficult to reverse once instituted. Third, China’s ability to use implicit regulations relies on state power, which, if necessary, can transform or shut down entire industries (as was the case with P2P lending). This logic is applicable not only to P2P lending, but also to other dynamic sectors, such as e-commerce, AI, and biomedical industries.

How can Western business leaders adapt to China’s unique regulatory environment? First, they must be comfortable with ambiguity, which in China creates space for innovation and allows companies to experiment. Second, business leaders must pay close attention to the spirit of the law and not just its letter. One source of information about the spirit of the law is the official pronouncements of government leaders. Third, under no circumstances should companies disobey the written rules: ambiguity in China is not an invitation to break the law.