The Eurasian Economic Union (EAEU) is a large-scale economic cooperation initiative between various former Soviet states. Its goal is to create a shared market similar to the European Union and it intends to achieve this by coordinating economic agendas, removing non-tariff trade barriers, and aligning the laws and regulations of its five members: Russia, Kazakhstan, Belarus, Armenia, and Kyrgyzstan. . Uzbekistan is an observer state, while neither Tajikistan nor Turkmenistan are members.

The EAEU is also in the process of negotiating free trade agreements with several countries, including India, Egypt, and Thailand, and has signed such agreements with Iran and Vietnam. The EAEU’s turnover exceeded $73 billion last year, with the Russian ruble serving as the main currency and accounting for 72 percent of all payments.

At the other end of the spectrum, it is abundantly clear that the EAEU does not provide sufficient economic benefits to Kazakhstan, the second largest economy in the union. Although the trade volume between Kazakhstan and other EAEU members has not increased significantly since 2014, the country has become more dependent on Russian exports and imports. In Kazakhstan, increasing tariff rates for non-EAEU member countries while allowing duty-free imports from Russia has resulted in trade diversion and negative economic consequences for the country.

In addition, Kyrgyzstan has one of the highest remittances/GDP ratios in the world, and the number of Kyrgyz migrant workers going to Russia increased significantly in 2014. As a result, the government became more amenable to Russian demands to join the EAEU. and he did it within a year. So far, Uzbekistan seems content to stay out of the union, but Tashkent gained observer status in 2021.

The Russian mindset behind the union’s formation was ultimately driven by geopolitical rather than economic concerns. With the EAEU, Russian President Vladimir Putin arguably sought to re-establish Russia’s dominance in Moscow’s traditional sphere of influence, which had been lost with the breakup of the Soviet Union. Building on the motivations of other members, a union with Russia provided political support, cheaper energy, and security guarantees. This is demonstrated by the intervention of Russia in the Second Karabakh War in favor of Armenia, the unconditional support for Alexander Lukashenko in Belarus and the recent intervention of the Collective Security Treaty Organization (CSTO) in Kazakhstan.

However, the recent international sanctions actually made the EAEU far more economically beneficial to Russia than ever before. Kazakhstan, for example, has been conducive to avoiding sanctions and importing prohibited products. As it stands, Russia needs the EAEU more than ever and will do everything possible to keep these countries on its side.

This is precisely why, after the EAEU summit in Yerevan, Armenia, in October, Russian Prime Minister Mikhail Mishustin emphasized the need for a unified market for oil, gas and electricity among member countries due to increases in energy prices. Mishustin stressed that the creation of such a common energy market will benefit all members and protect their citizens from rising energy prices.

Will these incentives keep Kazakhstan and Kyrgyzstan consolidated within the union and entice Uzbekistan to consider becoming full members? While Russian political and military influence is waning, will a Russian-engineered economic union survive in changing geopolitics? The answer stems in part from the unique stances of Central Asian governments, and it is also useful to look at other Russian-dominated regional organizations.

For example, during the most recent meeting of the Shanghai Cooperation Organization (SCO), the worsening border dispute between Kyrgyzstan and Tajikistan was very disturbing for Putin, since both countries are members of the CSTO. Many in Bishkek accused Moscow of backing Tajik President Emomali Rahmon despite Moscow’s inability to take action to defuse the conflict. As a result, Kyrgyzstan refused to participate in the latest CSTO military exercises in Tajikistan. The refusal to participate is a clear demonstration of Moscow’s waning influence in Central Asia.

As a result of the Russian leadership’s irredentist rhetoric and its implicit territorial claims to northern Kazakhstan, many Kazakhs view Russia with suspicion. Even after the CSTO intervened in Kazakhstan in January 2022, seen as a clear Russian endorsement of President Kassym-Jomart Tokayev, the Kazakh government has sought more vigorous opposition than expected to the Russian invasion of Ukraine.

Yet even if the Kyrgyz and Kazakh governments seem less willing to seek further integration with Russia and Uzbekistan never joins the EAEU, Russia is too powerful for any Central Asian leader to ignore. At the end of the day, the ability of Central Asian states to fend off geopolitical risks from Russia is limited, and an imminent attempt to disengage from Russia is almost certain to have profound implications.

In such a situation, public opinion matters, along with the government’s willingness to pay attention to it. So what does the public think? 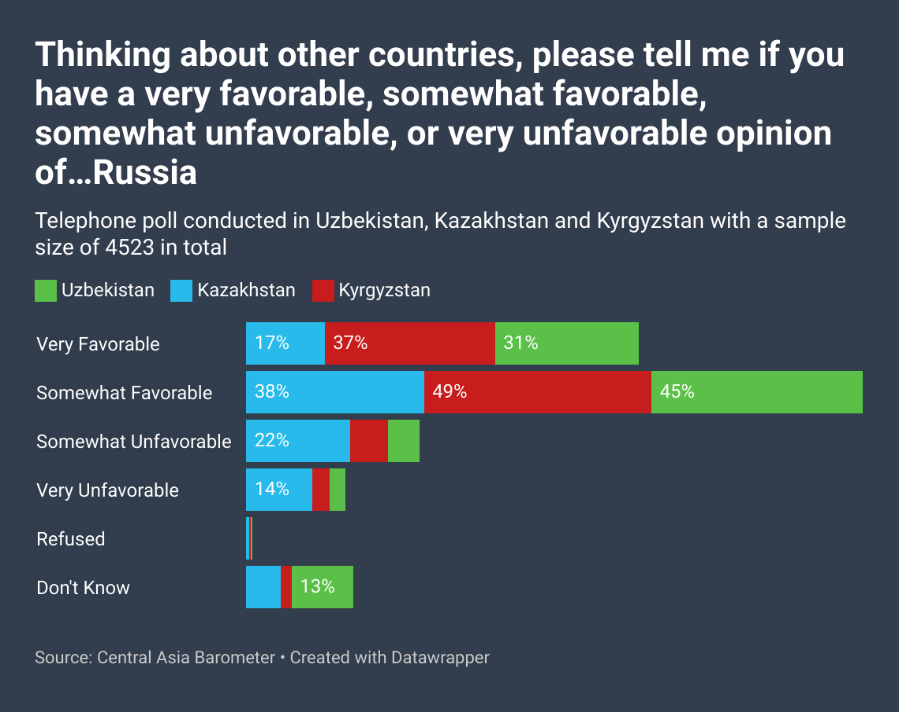 A Central Asia Barometer (CAB) survey conducted last may and june suggests that 63.5 percent of Kazakhs and 60.8 percent of Kyrgyz believe that joining the EAEU benefited their national economy. Furthermore, it shows that public intimacy with Russia remains high in the region: 85.7% of Kyrgyz, 76.4% of Uzbeks and 55.2% of Kazakhs have a favorable opinion of Russia. 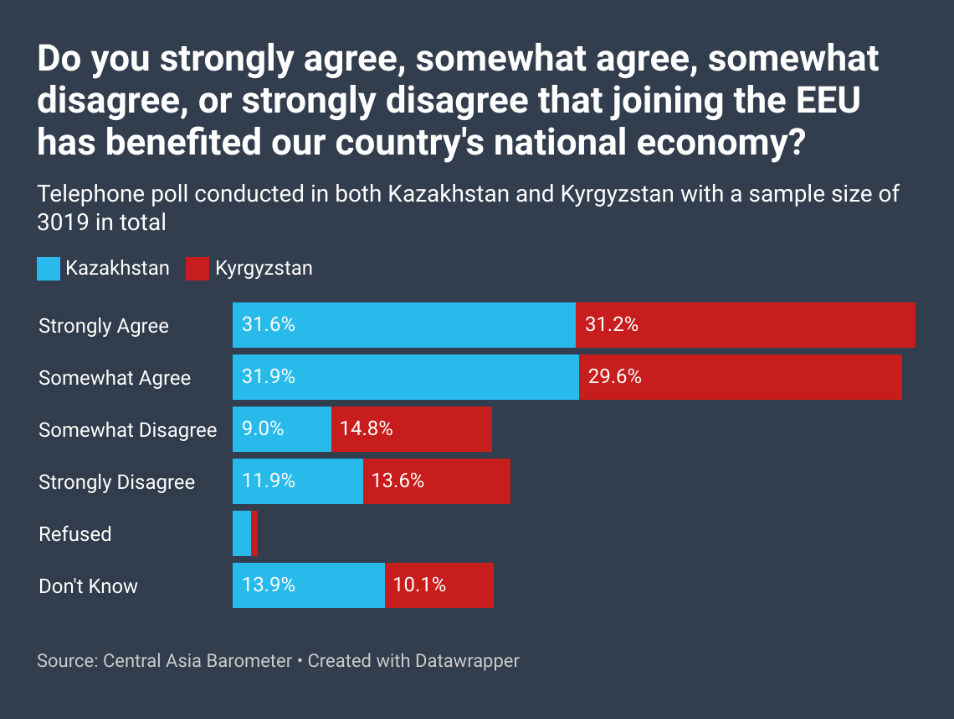 However, a more surprising point is that most people in these three Central Asian countries think that Russia will hit them hard due to its improving economic ties with China. 67.6% of Kyrgyz and 55.3% of Kazakhs believe that better economic relations with China could harm their economic relations with Russia. In Uzbekistan, which is not a member of the EAEU, this proportion is notably lower, at 28.4 percent. 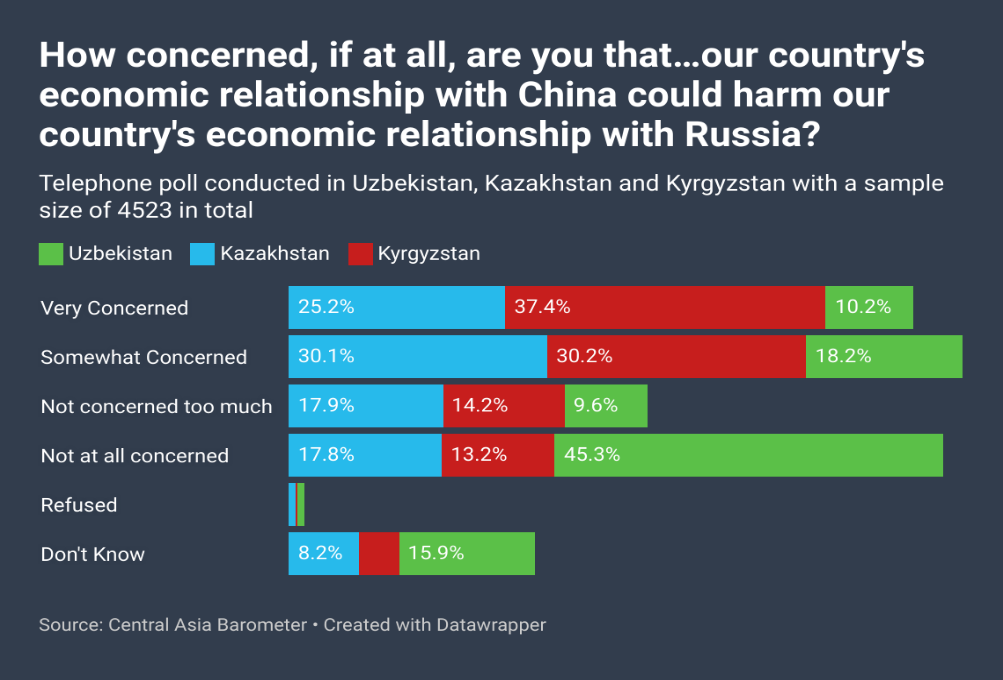 Public affinity for Russia remains very high, but Russian culture and language are losing their dominant position and must compete with different worldviews to win the hearts and minds of Central Asian youth. These highly diverse and broad-minded generations are made up of inspirations from Europe, Turkey, China or the United States.

Russia has little to offer economically; the unintended consequences and mounting costs of dependence on Russia will force these governments to diversify their diplomatic ties more than ever. However, this shift does not require these governments to seek stronger ties with the West or adhere to the conventional paradigm of multi-vector diplomacy. Instead, Central Asian leaders may be inclined to establish closer ties with China and Turkey. Both countries can provide better economic opportunities for Central Asians. China is the most important economic player in the region; is the largest trading partner of Kyrgyzstan and Uzbekistan by imports and Turkmenistan by energy exports.

While Russia is distracted by Ukraine, Turkey is also seeking stronger economic cooperation with Central Asia. In this regard, the Turkish Investment Fund was created following the last Organization of Turkish States (OTS) summit in November 2022. The fund aims to increase economic cooperation within member countries by supporting small and medium-sized enterprises in various industries.

Russia’s weakness in providing economic prosperity through the EAEU and the increased Chinese and Turkish economic presence in the region may also fuel the weakness of Russia’s ability to be a security provider through the CSTO. If Russia’s primary role as a security provider in the region begins to come into question, entrenched Russian dominance will weaken. If this happens, it would be unrealistic to expect the EAEU to expand and have a say in the future of Central Asia.