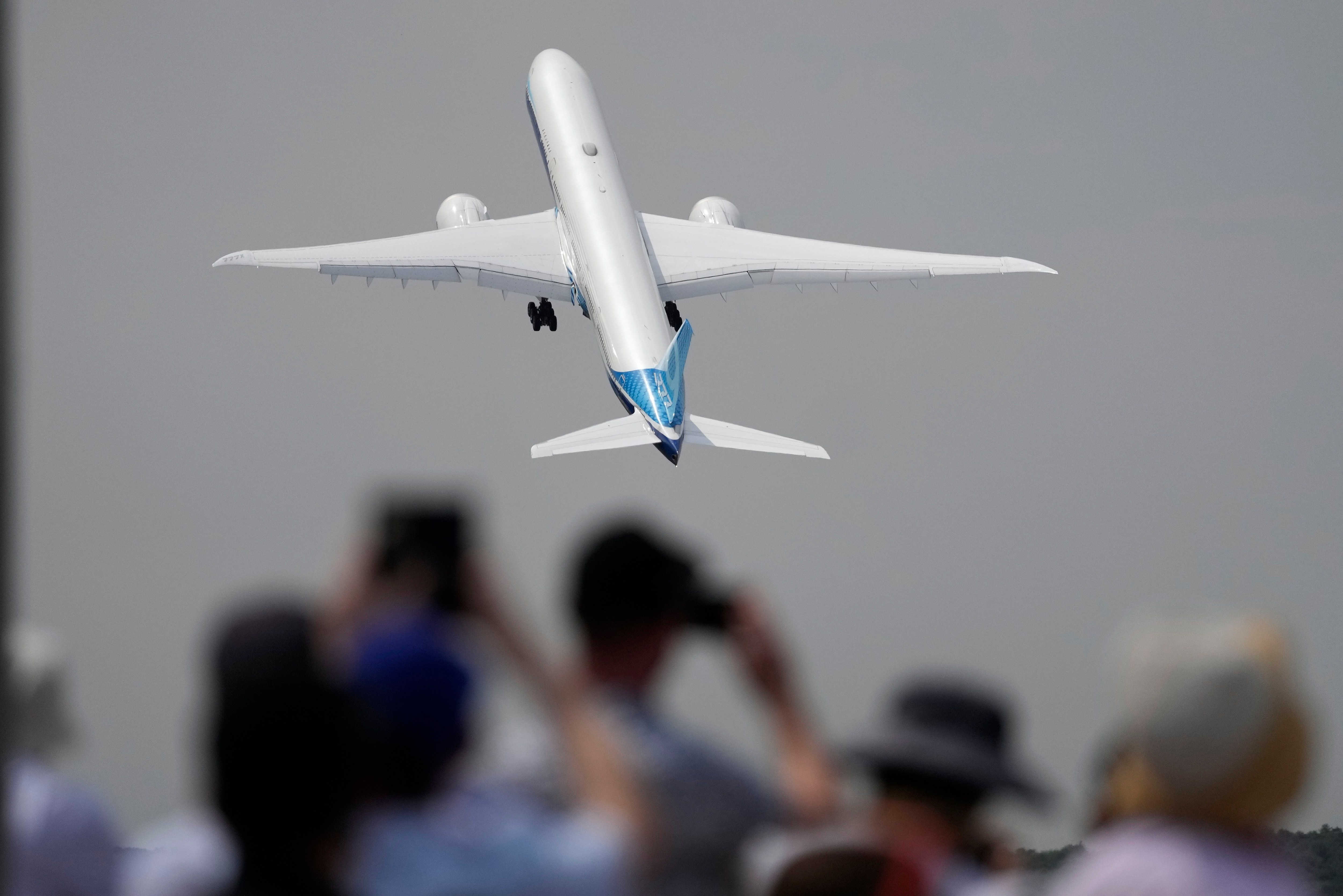 FARNBOROUGH, England — Airplanes are a minor contributor to global greenhouse gas emissions, but their share is sure to increase as more people travel in the coming years, leaving the aviation industry facing the prospect of stricter environmental regulations and higher costs.

The industry has adopted a goal of reaching net zero greenhouse gas emissions by 2050. Experts who follow the issue are skeptical.

Until the COVID-19 pandemic brought travel to a slump, airlines were on a steady course of burning more fuel, year after year. Today’s aircraft engines are the most efficient available, but improvements in reducing fuel consumption are agonizingly slow: about 1% per year on average.

At the opening of a major aviation industry show near London on Monday, discussion of climate change replaced much of the usual murmuring about big plane orders.

The weather was propitious. The Farnborough International Air Show opened as UK authorities issued the first extreme heat warning in England’s history. Two nearby airports closed their runways, one reported that the heat caused the surface to warp.

As airlines grapple with climate change, the stakes could hardly be higher.

Jim Harris, who heads the aerospace practice at consultancy Bain & Co., says that with airlines reeling from the shock of the pandemic, getting to net zero by 2050 is now the industry’s biggest challenge.

“There is no obvious solution, there is no technology, there is no set of actions that will get the industry there,” says Harris. “The amount of change required and the schedule are big issues.”

Aviation releases only a sixth of the amount of carbon dioxide that cars and trucks produce, according to the World Resources Institute, a Washington-based nonprofit research group. However, aviation is used by far fewer people per day.

Jet fuel use by the four largest US airlines (American, United, Delta and Southwest) increased 15% in the five years to 2019, the last year before air travel declined , even as they upgraded their fleets with more efficient aircraft.

Airbus and Boeing, the world’s two largest aircraft manufacturers, addressed sustainability during Monday’s opening day in Farnborough, although they approached the topic differently.

Europe’s Airbus and seven airline groups announced a venture in West Texas to explore removing carbon dioxide from the air and injecting it deep underground, while Boeing officials said sustainable aviation fuel, or SAF, will be the best tool, but not the only one, to reduce emissions.

Last September, airline leaders and President Joe Biden touted a deal to cut aircraft emissions 20% by 2030 by producing 3 billion gallons of SAF by then and replacing all conventional jet fuel for 2050. Climate experts have praised the idea, but said the voluntary targets are too optimistic. SAF’s current production is around 5 million gallons per year.

Sustainable fuel is a biofuel made from cooking oil, animal fats, municipal waste, or other raw materials. Its main advantage is that it can be mixed with conventional fuel to power jet engines. It has been used many times on test flights and even on regular flights with passengers on board.

Among the disadvantages of SAF is the high cost, about three times more than conventional jet fuel. As airlines look to buy and use more, the price will rise even more. Advocates are pushing for tax breaks and other incentives to boost production.

Policymakers see SAF as a bridging fuel, a way to reduce emissions until more dramatic advances, such as electric or hydrogen-powered planes, are ready. Those technologies may not be widely available for airline-sized aircraft for two or three decades.

Several companies are designing and beginning to build electric planes, but most are small planes that take off and land vertically, like helicopters, and are about the same size, with room for just a few passengers.

Electric planes big enough to carry about 200 passengers — a mid-size plane by airline standards — would require much larger batteries for longer flights. Batteries would weigh about 40 times more than jet fuel to produce the same amount of power, making electric planes impractical without major advances in battery technology.

Hydrogen, on the other hand, “is a very light fuel,” says Dan Rutherford, who leads the study on decarbonizing cars and planes for an environmental group, the International Council on Clean Transportation. “But it takes a lot of volume to store it, and the fuel tanks themselves are heavy.”

Despite that, Rutherford remains “cautiously optimistic” about hydrogen. His group believes that by 2035 there could be hydrogen-powered aircraft capable of flying some 2,100 miles (3,380 kilometers). Others, however, see obstacles including the need for massive and expensive new infrastructure at airports to store hydrogen that has been cooled into liquid form.

The UN aviation organization has reached an agreement, voluntary until 2026, then mandatory, in which airlines can offset their emissions by investing in projects to reduce greenhouse gases in other ways. However, some major countries have not signed it and environmentalists say the scheme will not cut emissions.

Even some in the airline industry, like United Airlines CEO Scott Kirby, have scoffed at carbon offsets, which companies can get for things like paying to plant trees.

The European Union has its own plan to cut emissions by 55% by 2030 and reach net zero by 2050, while including aviation in the 2015 Paris climate agreement targets. It is trying to end an emissions trading system and impose higher taxes on fossil fuels, including jet fuel. The rules would apply only to flights within Europe.

“The tax policies that are already in place, particularly in Europe, are going to drive up the cost of airline operations a lot,” says Harris, the Bain consultant. “Ultimately, fees go up by either paying more for sustainable aviation fuel or taxes on fossil fuels.”

Airlines also face the risk of being flight-shamed: More consumers could choose to travel by train or electric vehicle rather than by plane if they produce fewer emissions. That doesn’t seem to be holding many travelers back this summer, though, as pent-up travel demand has led to full planes.

It remains to be seen whether fuel and aircraft changes can cut emissions fast enough to meet the industry’s 2050 target, and whether airlines act on their own or under pressure from regulators. But it won’t be easy.

“We’re not on track to achieve those goals,” says Ed Bastian, CEO of Delta Air Lines. “We need energy producers to invest in sustainable products for us, (which) will require the government to intervene.”

Rutherford, the transportation expert, notes that net zero “is a really challenging goal.”

“If we are not clearly on a trajectory of reducing emissions and mass consumption of clean fuels by 2030 and 2035, we are not going to reach net zero in 2050,” he says.

Koenig reported from Dallas. Frank Jordans in Berlin contributed to this report.