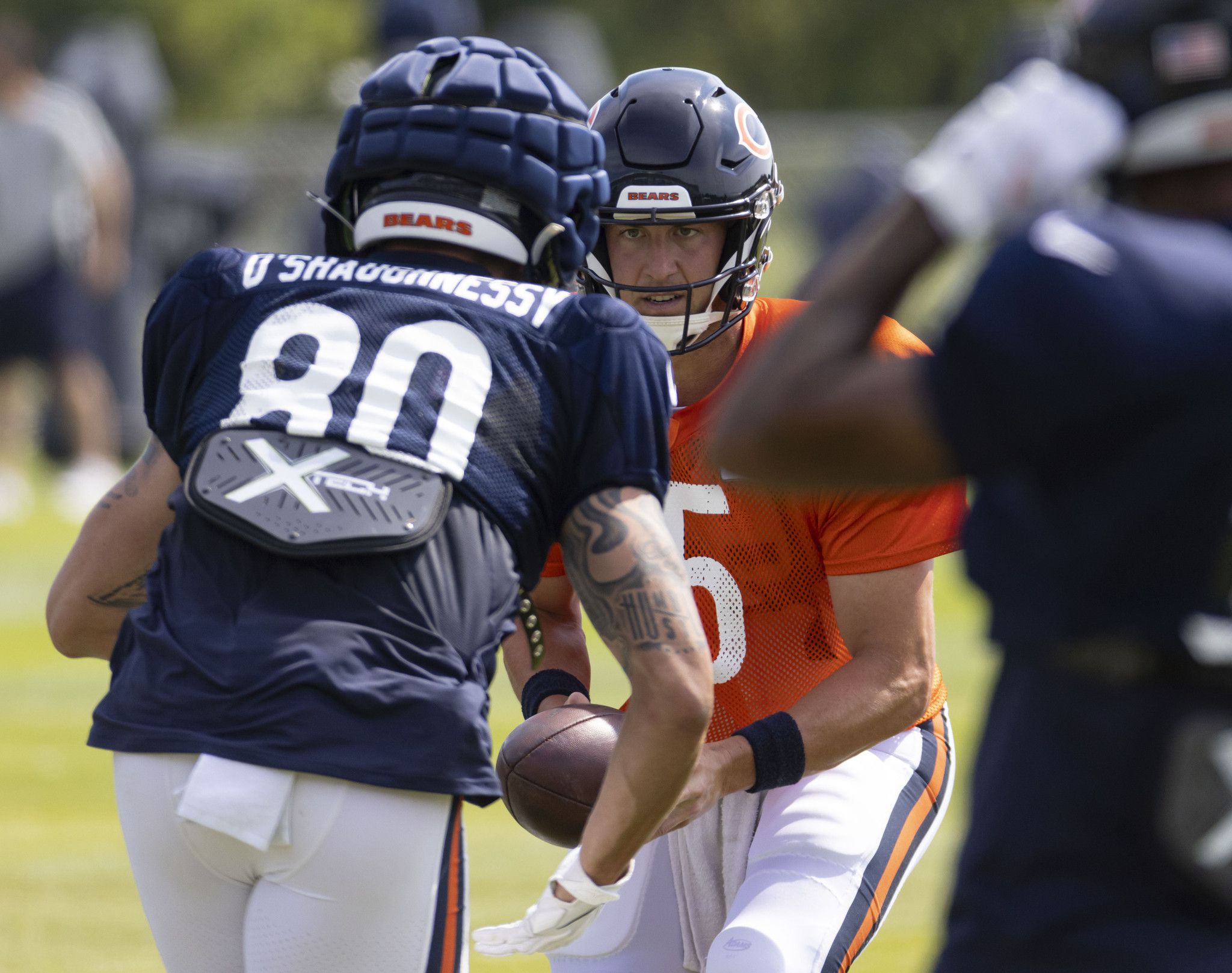 The Chicago Bears had their first padded practice of training camp Tuesday at Halas Hall.

The Bears’ offense has had its share of struggles in the first six practices as players adjust to new offensive coordinator Luke Getsy’s system. Those hits behind starting quarterback Justin Fields continued in practice Tuesday, including in two-minute drills.

Siemian said that while they don’t want to ignore mistakes, the Bears also won’t have a better understanding of where they are until they’re further into camp.

“We just put the pads on today, right? So at this point, there’s probably a lot of overreaction to practicing reps,” Siemian said. “Football is meant to be played with the pads on. … It’s a violent, physical game, so we’ll see what we have here in the next two weeks and get into some real competition.”

False starts continued to be an issue at times Tuesday, and Siemian attributed it to the learning process as the Bears try to master “a lot of timing.”

“Especially early on, it may not seem so clean, but I would prefer it to happen now rather than weeks 4, 5, 6,” Siemian said. “The execution has to be better. We have to start with the ball at the same time. That is paramount.

“At the same time, I really enjoy working with all these cadences, and it’s nice that we’re challenging the guys with variety.”

In his eighth season in the NFL, Siemian considers helping Fields one of his duties. He said Fields is a “smart guy” who rarely makes the same mistake twice. He also said that Fields has “great resolve” when he drives practice shots.

“He’s a confident guy, he’s got great determination and obviously he’s got great physical talent,” Siemian said. “I’ve had a lot of fun watching him develop and seeing him take leaps and bounds. Justin, myself, no one is a finished product right now, but it’s great to see the improvement when we’re watching the tape.”

Jones, a fifth-round pick out of southern Utah, has been getting a good chunk of first-team reps at left tackle as Reiff increases his total involvement after signing with the bears at the start of camp. It seems likely that Reiff, a 10-year veteran with 139 career starts, will eventually take over at left tackle, though he made reps at right tackle with Larry Borom on Tuesday.

Jones is taking Reiff’s arrival in stride and says he appreciates being able to learn from Reiff’s experience.

Jones said the biggest difference he notices between himself and the older players is how the veterans communicate and what they see on the field.

“I move very well and I can recreate some of their movements very well, but they see things. They look at the defense totally differently than I do,” Jones said. “That’s one of the most important things, is noticing and seeing how they see it and asking them when they walk off the field, ‘How did you see that?’ Or when we’re in the meeting rooms, really focusing on the questions they’re asking. Because it’s much broader than I’ve ever had and it also comes from a small school. They focus a lot on what kind of defense they’re looking at. This is the NFL.”

The Bears allowed eight-year punter Pat O’Donnell to move to the Green Bay Packers in the offseason and drafted Gill in the seventh round. Hightower said he was pleased with where Gill is located.

“He takes his job like a pro, like he’s a veteran,” Hightower said. “Take care of his body. It is very important to him. He does extra work. … He is never satisfied.

“All rookies have to develop, and they all have growing pains. … I can only tell you that as a player, as a person, he has shown that he is mature and that he hits the ball very well.”

Bears kicker Cairo Santos was affected by the departure of O’Donnell, who started during Santos’ record field goal streak. Hightower said that Gill takes great pride in discussing different waiting scenarios with Santos, and that the pair is developing a good relationship.

Offensive tackle Teven Jenkins remained out of practice with an undisclosed ailment. Linebacker Roquan Smith was in attendance but isn’t practicing yet as he awaits a new contract with the Bears.